Our sleep is divided into several phases that alternate throughout the night. In addition to the deep and light sleep phases, the so-called rapid eye movement (REM) sleep phase is of great importance, especially for our well-being. But what makes this stage of sleep so special?

Rapid Eye Movement – what is so special about REM sleep?

The most typical feature of REM sleep can be found in its own name: the rapid movement of the eyes under the closed eyelids as we sleep. REM sleep is characterised by a relaxation of the muscles, an elevated blood pressure, and increased heart rate. REM sleep is associated with brain wave activity of 4 to 8 Hz, considerably more than we experience in our waking state. The body is in a kind of paralysis during the REM phase to keep the movements experienced in the dream from taking place in real life. All that moves are the eyes, controlled by special nerves. 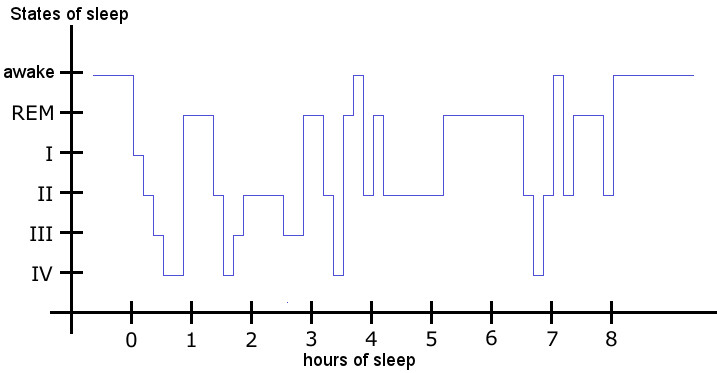 In contrast, during the non-REM sleep, both our blood pressure and body temperature fall and we hardly dream at all. A hypnogram (see Fig. 1) shows the stages of sleep achieved during night sleep and also the duration and sequence of the individual REM phases. During sleep, there are 3 to 5 REM phases a night, followed by phases of deep sleep. Further research has shown that the first REM period occurs about 2 to 3 hours after falling asleep and lasts only about 10 minutes. The analysis of the sleep cycle, however, has shown that the second REM phase is approximately twice as long. Toward morning, the REM phases reach as long as a full hour. Late risers often dream for up to two hours. If one sleeps 7 hours, half of the dream phases are in the last two hours. In adults, REM sleep represents 20 to 25% of our total sleep time. Newborns spend more than 50% of their sleep time in REM phases. For younger sleepers and with age, there is an increasing likelihood that the end of a REM phase will result in the person waking up.

What happens during REM spleep

Dream activity has been detected in every phase of sleep, but its intensity sometimes differs quite significantly among the various phases. Experiments with subjects have shown that dreams during REM sleep are the strongest. Indeed, those who were awakened during REM sleep were quite able to recall their dreams. Those who were awakened during non-REM sleep had no recollection of their dreams. REM sleep is characterised by intense brain activity reminiscent of that we experience during our waking state.

REM sleep was only discovered about 60 years ago. Previously, scientists had assumed that nothing happened during sleep and that there was therefore nothing to investigate. In 1953, sleep researcher Nathaniel Kleitmann and his graduate student Eugene Aserinsky were able to refute this view successfully together with their research team in a sleep laboratory. It was in that year that the researchers discovered REM sleep. Since then, research has provided more and more information about how REM sleep affects our well-being [Read more …].


READ MORE ABOUT RAPID EYE MOVEMENT stimulation
Learn how we can use rapid eye movement stimulation to coach ourselves for greater mental and emotional well-being and what role EMDR plays in this process. [Read more …]